Leadership Development for Grass-Root Women: A Sustainable Movement of Social Change Based on Gender and Social Equity, Deli Serdang 6-8 May 2014

WRI’s 2012 research entitled “Feminist Leadership in the Post Authoritarian Regime in Indonesia: Its Impact on Social Movements and Women’s Welfare: Case Study in 5 Regions” found that cultural, social, and political influences in Indonesia have hindered female leaders from using their power to overcome women’s issues.

Women’s movement in the form of non-governmental organizations is an effort for women to create a social leadership space which provides a larger sense of equity and equality instead of domination. However, it is impossible to discuss female leadership in a larger social context without addressing the social and cultural factors.

This relates to the objective of the women’s organizations to create social change based on gender and social justice. Organizing oneself, groups or community to create social change would certainly hold the potential of risks of new problems or even counterattacks. The involvement of women in activities alone can create pressure from religious and other leading figures who disagree with women’s activities outside the domestic sphere.

In addition, the patriarchal society tends to view leadership as masculine. The main obstacle in realizing a feminist perspective leadership is the domination of the 'maternal normative’ and ‘paternal normative’ discourses, which are dichotomized and respectively symbolized. When women become leaders, this will burden them because their leadership does not adhere to the accepted normativity.

Considering the importance of Women’s Leadership as a social change movement, the Women Research Institute (WRI) held a capacity building training for leaders and members of women’s organizations. The objective of the training is to address the need for sustainability of women’s organizations in order to maintain and strengthen the position of women in society. This training aims to enhance the leadership skills of female leaders and activists in the five regions, specifically in terms of the advocacy of women’s issues, and facilitate the advocacy plans of female leaders. It is expected to improve their capacity in exercising their power to overcome cultural, social, and political challenges.

WRI believes that the advantage of promoting female leadership is beyond building the personal capacity of a single woman. This is because a woman with ample personal capability will usually share the benefits that she have received (both knowledge and skills) to her closest environment and family members. Moreover, women with access to knowledge, social capital, and capital assets demonstrate that they are more capable to participate in decision-making process to promote women’s interests in social life. 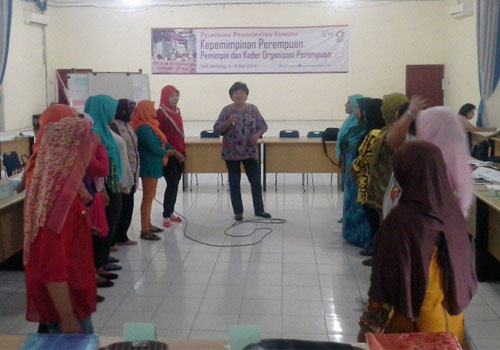 In April 2014, WRI held the pilot training and module try-out in Padang. On 6-8 May 2014, WRI once again held a training in Lubuk Pakam, Deli Serdang District, North Sumatra. The second training, facilitated by Edriana Noerdin and Sita Aripurnami, was attended by 20 participants. The participants were members of the HAPSARI Federation, such as SPPN Serdang Bedagai, SPI Serdang Bedagai, SPI Deli Serdang, SPI Labuhan Bantu and the HAPSARI Secretariat. Most participants who were members, activists and leaders of the HAPSARI Federation have succeeded to hold important positions in government programs in their villages. In addition, they are also actively involved in local decision-making meetings. This became the basis of WRI’s objective to provide capacity building programs for the leaders and activists of the HAPSARI Federation to achieve sustainability of women’s organizations; ultimately bringing change to society, especially women’s lives.

The training materials consisted of three sections, namely gender, leadership, and advocacy. Based on the evaluation and recommendations during the pilot training and module try-out, WRI had constantly improved the training module to accommodate the pressing needs and challenges that are faced by women’s organizations, particularly the leaders and successors of women’s organizations. Improvements to the module include the addition of new materials on sexuality and reproductive health (SRHR).

The participants of the training admitted that they often received materials on gender, but found them difficult to be implemented. However, WRI’s training was slightly different in comparison to their previous trainings. Other than the fact that all the participants were women, during this training they were given the opportunity to voice out their problems, which are relatively women-related. What made them even more enthusiastic was WRI’s training method that used role play and simulation of advocacy, which they found useful. Through the simulation of advocacy, they could put to practice the theories and concepts of gender that they have received. The training was also filled with ice-breaking games which made them more excited to attend the entire training.***