Reproductive and Sexual Health and Rights Workshop in Manila, 21-25 January 2014

Renewing Commitments to Sexual and Reproductive Health and Rights (SRHR)

On 21-25 January 2014, the 7th Asia Pacific Conference on Reproductive and Sexual Health and Rights (APCRSHR) workshop was held in Manila. This year’s theme was “Examining Achievements, Good Practices and Challenges: Towards a Strategic Positioning of SRHR for all” and featured several speakers from various countries, one of which was Indonesia. This activity was held at the Philippines International Convention Center (PICC) in Manila, Philippines. One of WRI’s researchers had the opportunity to be a speaker at the event.

The Asia Pacific Conference on Reproductive and Sexual Health and Rights (APCRSHR) is a biennial event which is held as a response to the status of the International Conference on Population and Development (ICPD) Plan of Action (POA), Millennium Development Goals (MDGs) on Sexual and Reproductive Health and Rights. This event has been held six times since 2001 until 2011, and involved various stakeholders and development actors coming from various communities.

One of WRI’s researchers, Frisca Anindhita, was selected as a presenter on the third day during the parallel session of APCRSHR with the theme “Renewing Commitment to SRHR”. As speakers during this parallel session were three presenters: two from Indonesia, namely Fasli Jalal and Frisca Anindhita, and one speaker from Malaysia, Tey Nai Peng. This session discussed how action plans carried out for SRHR tackle the existing challenges. This session was opened by Juan Antonio Perez III as the Chair, along with Sono Aibe as Co-chair.

Prof. Fasli Jalal, MD. Ph.D, Head of the National Population and Family Planning Board (BKKBN), began his presentation by showing the success of the Family Planning program, starting from the 1970s until late 1990s, with a significant decrease in fertility rate and the increase in usage of contraception. However, the challenge that is currently faced is the stagnant usage of contraception. In response to this, since 2007, policy responses have been taken to develop the capacity of resources at the central and provincial levels of BKKBN, as well as involve the roles of the private sector within it. 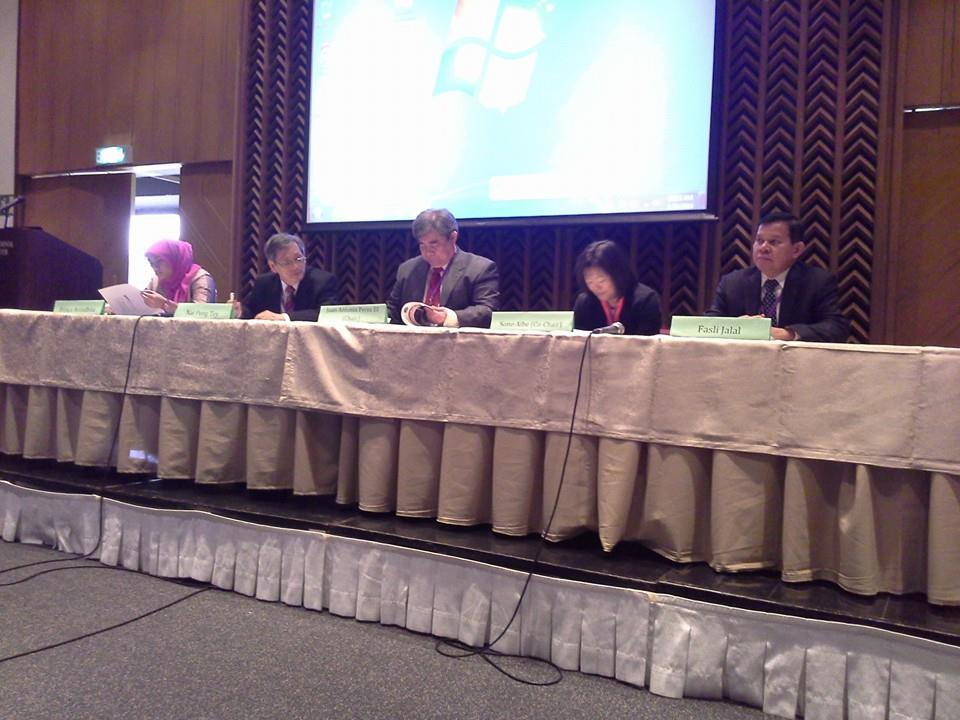 This is similar to the occurrences in Malaysia, as Tay Nai Peng from the University of Malaya presented, where the policy, institutional and structural obstacles, social change and individual perspectives are influential factors in the usage of contraception. He recommended pushing for the fulfillment of SRHR for women, overcoming fertility issues for adolescents, reducing inducted abortion, and overcoming maternal mortality.

Frisca Anindhita presented the importance to respond and provide recommendations for the report of the Post-2015 Development Framework which was launched by the High Level Panel Meeting of Eminent Persons (HLPEP) pursuant to the situation in Indonesia, particularly for goals related to gender and women’s health. The Post-2015 Development Agenda should have involved not only women, but also disabled groups, LGBT, youths, and other vulnerable groups.