Women Research Institute (WRI) On the United Nations Fiftieth Session of Commission on the Status of Women, USA, February 27 - March 10, 2006

On 27 February to 10 March 2006 Women Research Institute (WRI) had an opportunity to attend the United Nations Fiftieth Session of Commission on the Status of Women in UN Headquarter, New York, USA. WRI was one of the members of official delegation of the Republic of Indonesia along with other Indonesian NGOs. Sita Aripurnami and Edriana Noerdin as the representations from WRI participated in one of the sessions. 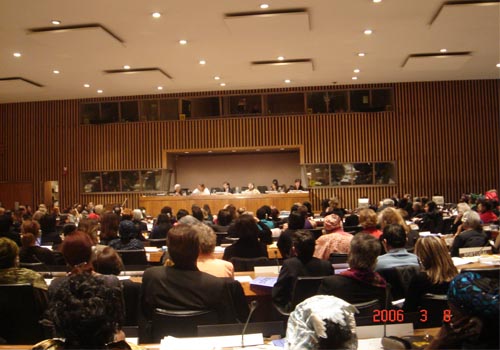 To participate in the Session, WRI was represented by Sita Aripurnami and Edriana Noerdin to the Fiftieth Session of Commission on the Status of Women on February 27 to March 10, 2006. WRI, represented by Aripurnami and Noerdin, along with other NGOs representations such as Darmiyanti Muchtar from Kapal Perempuan and Sri Palupi from Institute for ECOSOC Rights (henceforth the Team), was the member of Official Delegation of the Republic of Indonesia to the Session. The Team took a role as being adviser to Government Representatives and has provided them with inputs to be proposed for finalization of the Resolution of the Commission. The issues the Team has addressed in the inputs were, among else, migrant workers and political participation of women.

The advocacy work at international level such as this has played a major role in improving institutional capacity of WRI in building network and in running its international advocacy on the issue of women and migrant workers, to be specific.

At national level, however, WRI’s international advocacy work is still far from putting strong effect on policy change. Nevertheless, from the other side of view, the success in building collaboration with government (KPP to be specific) to formulate national and international agendas on the issues of women and migrant workers has been an influential achievement for stepping to policy change.

The Team’s inputs seemed to be important for Government to affirm the arguments for Government’s proposal to the Resolution regarding participation of women in connection to poverty alleviation. There was a hard debate in the session as to the issue of poverty; and it demonstrated different interests between developed and developing countries. Yet at the end most of the inputs were adopted into Resolution. 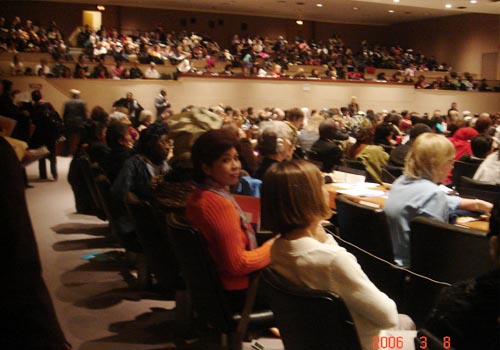 Enforcing cooperation with national government and foreign countries at international level was the most challenging effort for there has been interest discrepancies between developed and developing countries. On the other side, government policies on improving the status of women often obstructed by their incapability to realize such policies and by political interest of developed countries which are not in the same lane with national policies.

The problems to WRI are lack of knowledge and experience in international advocacy, especially one related to the mechanism and procedure of international conference. In addition, time limitation to prepare for its involvement in the conference was another problem. These problems have led to imperfection achievement of planned objectives.

WRI has had important lesson learnt from the experience of its involvement in the conference, albeit all those challenges and obstacles. Good preparation for such international conference usually takes quite a long time; good coordination among Team; and well planned strategy of advocacy. A good example was about the materials for conference; it was inadequate for only one flyer to cover it, for there are some important issues to address in the conference need to be scrutinized well in terms of substantial preparation as well as in terms of its physical forms, both electronic and printed files. Another thing was that Team member has to work together to formulate and make use of all the substantive materials to be presented.