The Youth Multi-stakeholder Meeting on 24 March 2013 at Swisbell Hotel Bayview Nusa Dua, Bali is part of the parallel process prior to the UN High Level Panel of Eminent Person on Post 2015 Development Agenda meeting. This meeting was held by the Indonesian Youth Working Group, of which the Women Research Institute (WRI) is a member. Ayu Anastasia and Rahayuningtyas represented WRI in the meeting. The High Level Panel meeting discussed strategies to achieve the Millennium Development Goals (MDGs). MDGs is highly relevant to the lives of youths, which becomes the reason for the involvement of youths in the policy-making process of the Post-2015 Development Agenda.

This event was opened by Muhammad Iman Usman from Indonesian Future Leaders (IFL) and Rachel Arinii Judhistari from Asian Pacific Resource and Research Centre for Women (ARROW) Malaysia as the head of committee. The aim of this meeting was to create a consultation forum for youth organizations throughout the world to strategize in delivering youths’ messages and interests, particularly youths from the marginal group, to the High Level Panel of Eminent Person (HLPEP) which would produce a report from various global consulting processes for the Post-2015 Development Agenda. The interests of youths, particularly marginalized youths, include access to health, education, employment, fight against HIV/AIDS, and indiscriminative civil rights.

The event was commenced with a discussion of the visions and expectations of participants, which comprised of 100 youths from 26 countries and 67 youth organizations throughout the world. This was followed by a panelist discussion which brought three main issues. The first one, which was the Process of High Level Panel of Eminent Persons on Post 2015 Development Agenda (HLPEP) Meeting, was delivered by Nick Hartley from Restless Development, UK. The first HLPEP meeting was held on 25 September 2012 held in New York, USA, which discussed the platform and working plans for the Post-2015 Development Agenda. The second HLPEP meeting was held in London on 30 October – 2 November 2012; its topic being the vision and framework of questions on HLPEP reports, poverty, and human development. This meeting was resumed in February 2013 in Monrovia, Liberia, which was the third meeting, following the agenda of power analysis and national capacity for Post-2015 Development. The discussion continued in the Bali meeting on 24-25 March 2013 with a focus on national capability, global partnership, and a formulation of summary for the Final Report of HLPEP on Post-2015 Development Agenda. 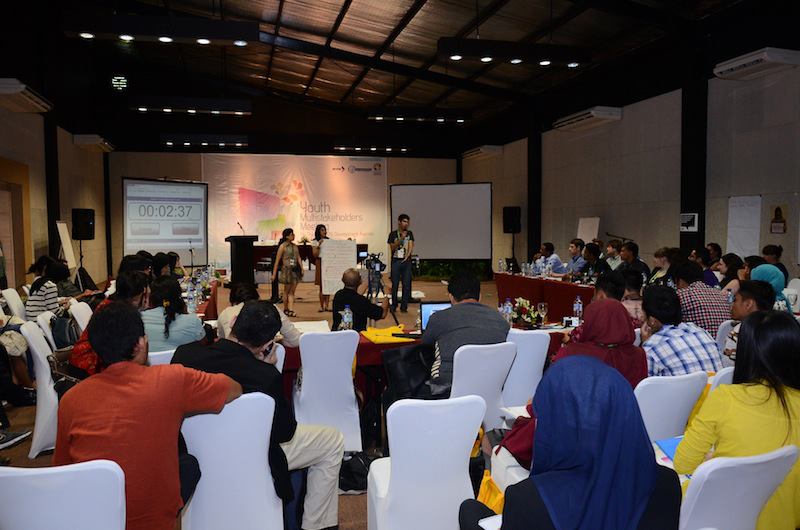 The second theme of the discussion was on the International Conference on Population and Development (ICPD) Process for Post 2015 delivered by Rinaldi Ridwan from Youth Coalition for Sexual and Reproductive Rights. Rinaldi conveyed the results of the Global Youth Forum on 4-6 December 2012 in Bali which resulted in a youth declaration. The declaration consisted of recommendations toward the fulfillment of youths’ rights in the health and education sectors, rights to be respected especially for those with different sexual orientations, rights for decent jobs, and rights to participate in development.

The third theme was conveyed by Joao Felipe Scarpelini, a representative of Youth Working Group Brazil, who presented about Rio +20 that took place in Rio de Janiero, Brazil. He explained that Rio +20 could be considered as the initial event which involved youths in the policy-making process for global development. The result of the Rio +20 meeting described that youths are 1/3 of the world’s population, which means that youths will be the ones to contribute to global development in the future. There are currently numerous sectors where youths can enter and participate in shaping development, from the education, health, and economic sectors to preservation of environment.

Various hopes were expressed by the participants, such as the hope to ensure access to health (e.g. reproductive and sexual health services, including for HIV/AIDS) for youths from marginalized groups. Until now, the access to health services is still highly inadequate for unmarried youths, who are without financial assistance and access to a near health service center. The Post-2015 Development Agenda must be able to accommodate issues of health, education, and employment. Youths must gain access to a comprehensive, relevant, and affordable education. In addition, in the employment sector, youths must be empowered in order to develop as employers, thus creating more jobs. 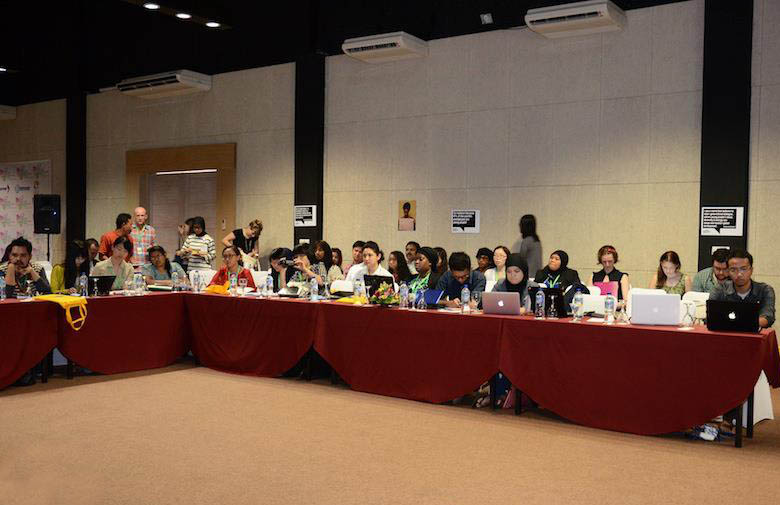 The meeting was followed by a thematic discussion divided into two sessions. The first session discussed the explanation of the 4th HLPEP Meeting’s theme in Bali, which are theme identification, global cooperation, as well as execution and monitoring. Global cooperation is defined as a form of interrelatedness between the (local and central) governments, private sector (business practitioners/ entrepreneurs), Non-Governmental Organizations (NGO), UN Agencies, Youths, and other sectors which were involved together in the process of post-2015 development.

The discussion concluded that cooperation can be carried out in various forms. For instance, youths all around the world must build and foster relationships among themselves, from local, national to international levels. The pattern of such relationships should be inclusive, egalitarian, and transparent without discriminating their backgrounds so that youths’ participation can achieve its maximum potential to support the post-2015 development.

In addition, the government’s role is needed to form a focal point for youths to strengthen the relationship between youths and the government. As the government cannot work without the role of youths, the government should make youths as its partner. This focal point will prove that youths must be a part of the policy planning and making, both at the local and national level, from its implementation to a transparent evaluation. With the private sector, youths must cooperate in three aspects, which are sustainable development, partnership (education, employment, etc.) and enhancement of youths’ capacity.

The process of monitoring and evaluation is an important process in monitoring the execution of the post-2015 development agenda. In the process of these two aspects, there are two points that must be ensured, namely making specific, measurable, and realistic indicators as well as ensuring an effective process of data-collecting. Experiences in MDGs show that coordination between the involved stakeholders is needed in the process of data-collecting. Lack of coordination regarding the indicators of MDGs has resulted in many different data in one country. It is expected that youths can be involved in the collection of data and can access results of the measurement of indicators to be able to engage in the process of analyzing and evaluating the implementation of the ongoing development process. The event was opened with a presentation from the grass-root group about the results of the pre-meeting discussions which were held for the previous two days, 23-24 March 2013. The speakers were representatives from groups of female migrant workers, children and those with disabilities, women, lesbians, gays, bisexual and transgender (LGBT), gender inequality, climate change, and the city’s unprivileged.

On Monday, 25 March 2013, representatives of youths all around the world held a discussion with representatives of HLP who were present: John Podesta (Centre for American Progress, USA) and Yinfang Wang (Secretary-General’s MDG Advocacy Group, China). A number of 100 youth representatives from 26 countries delivered the result of the discussion held the day before as an input for the post-2015 development agenda, which covers aspects of education, health, environment, disparity (free from discrimination), government, employment, and gender equality.

The youths’ input for health issues included the need for the government to provide a friendly health service for youths and eliminate negative stigma for youths with HIV/AIDS. Establishing peer-educators for health service is also greatly important. The government must realize that educating youths about reproductive health is necessary, as it has a direct implication on reducing the rate of maternal death and infant mortality. The peer-education activity can also curb the spread of HIV/AIDS for children and teenagers to reduce the rate of HIV/AIDS. The government should also ensure that children, teenagers, and youths can obtain access to health, including clean water, as well as access to health services, including medicine, as necessary. Also no less important is that the government should exert efforts to impede teen marriages, which are prevalent among youths. Such marriages cause early pregnancies which lead to the high Rate of Maternal and Infant Deaths. 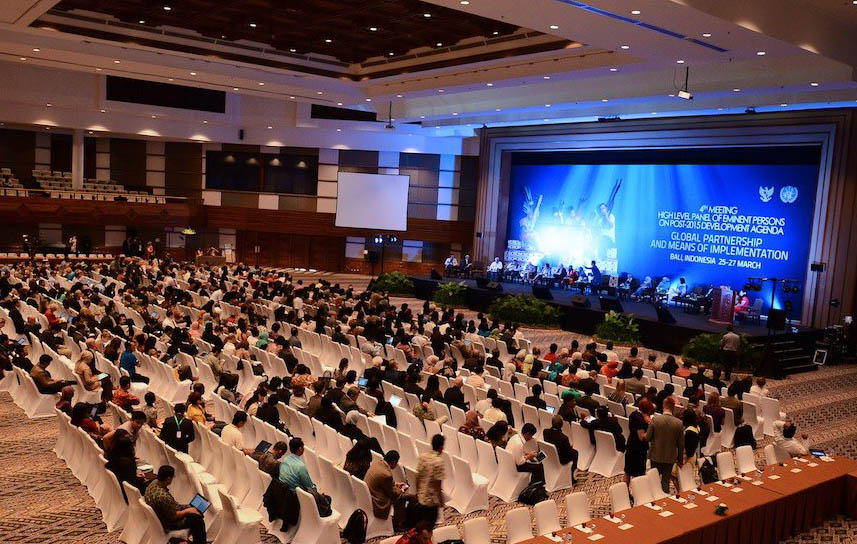 Regarding the governmental sector, the youths opined that they must participate in national and local parliaments. This can be reached by creating youth parliaments which include youth organizations from various backgrounds to work more effectively as part of the development. At the global level, youths are also expected to be involved in the process of policy making. In the effort to strengthen youth networks in enhancing involvement in the government, youths must actively build relationships with the media, maximizing social media as a partner for youths that will help to propel youth issues to the world.

Regarding the education sector, as the most important sector in life, the government must be able to provide primary until high-level education for youths in every region with equal facilities and qualities. It is hoped that an inclusive and comprehensive education system will be realized for all. Youths can also assist fellow youngsters to obtain education, such as by offering additional tutorials or mentoring in subjects received in formal schools. It is expected that youths can also be involved in the making and monitoring of education policies, enabling the education system to run in align with the perspectives of youths, who will experience the direct impact. Education is essential because it defines the future of the nation. With quality education, youths’ will be able to develop their capacity and skills, preparing themselves to enter the professional world and run the governmental system to bring this nation to a better future.

In the employment sector, the youth representatives offered several views and ideas on their involvement in the working world. The state often mistakenly defines youths aged 16-24 years as children, causing difficulties in providing jobs for them. Children should have been defined as those under the age of 14 years old. The youths also pushed toward the establishment of a labor union to strengthen their bargaining position and protect employers from the pressure of companies. They also hoped to build cooperation with a number of parties, particularly the companies, to provide special trainings for youths on entering the employment sector. 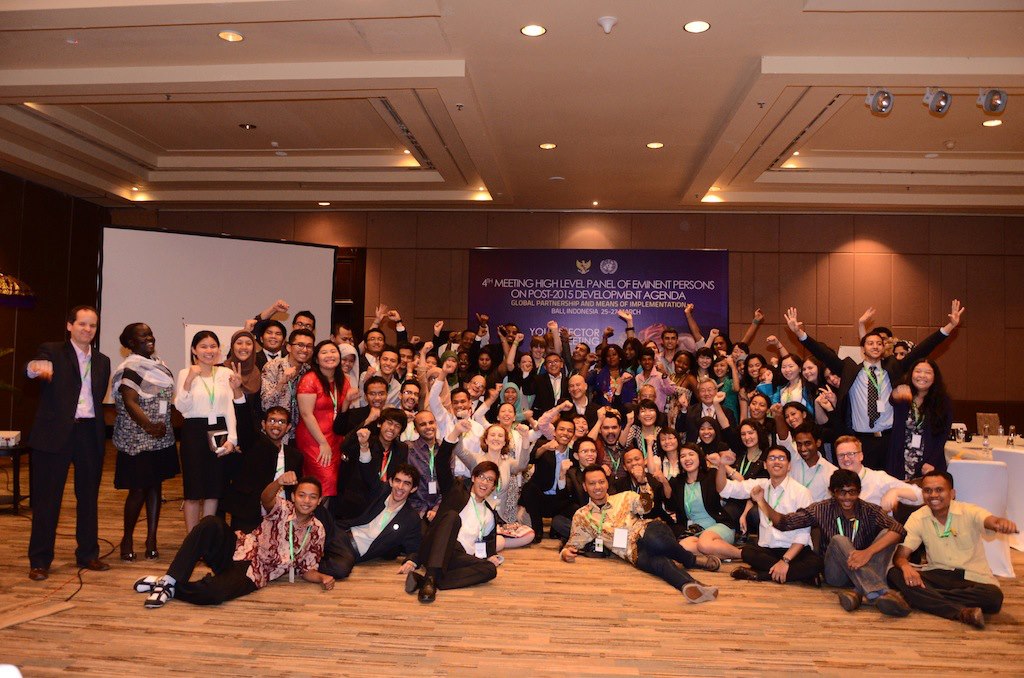 The discussions of the youths were delivered to the HLP representatives who were present. The HLP representatives stated that they generally agreed with all the youths’ inputs. However, they explained that in the HLP discussions a lot of interests will be fought for, which may cause them to eliminate issues or suggestions that have been given. Especially considering that several suggestions from the youths were yet to become a mutual interest among other HLP members, such as education or reproductive health issues, which several members stated are not yet essential for suggestions on the post-2015 development agenda. Therefore, youths must continuously raise their voices and build networks to unite their ideas, in order to make their opinions heard as a mutual necessity for youths all around the world.***