Women Leadership as an Attempt to Tackle Social, Cultural, and Political Challenges in Indonesia

As a follow-up to Women Research Institute (WRI)’s 2012 research entitled “Feminist Leaderships in Post-Authoritarian Indonesia in Influencing Social Movements and the Correlation to the Improvement of Women’s Prosperity: Case Study in 5 Regions”, WRI held a capacity building training for leaders and staff of women’s organizations in the effort to achieve sustainable women’s organizations in strengthening women’s position in society.

The aim of this capacity development training is to strengthen the leadership skills of the leaders and staff of women’s organizations in advocating women’s issues. This relates to the number of challenges faced by women’s organizations in carrying out their programs. WRI’s previous research has found that cultural, social, and political influences in the Indonesian society have obstructed female leaders from using their power to tackle women’s issues. 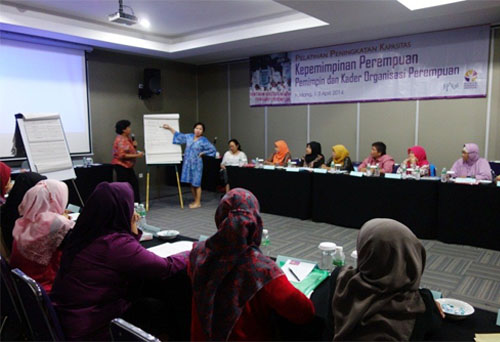 In regards to that, WRI designed a program in the form of a capacity building training for leaders and staff of women's organizations which leads to the development of advocacy plans in 5 areas in Indonesia, namely Padang, Jakarta, Deli Serdang, Mataram, and Makassar.

This Women Leadership Training consisted of three main materials, namely Gender, Women’s Leadership, and Advocacy. Prior to the training, WRI had completed the first drafts of the guideline module, reading materials, and guideline handouts for the Women Leadership training. Both drafts of the modules will be developed and improved continuously based on suggestions from an expert panel as well as the inputs received from the trainings in all five areas.

The pilot module and the “Women Leadership” training was held for the first time in Padang City on 1-3 April 2014. The training was attended by 22 female activists in Padang, coming from various NGOs, women’s CSOs, and universities, such as We Can Alliance of West Sumatra, LP2M, Harmonia, Indonesian Women Coalition (KPI) Padang, Walhi, Totalitas Foundation, PSW Andalas University, Faculty of Economics Padang State University, and Association of Women with Disabilities, West Sumatra. 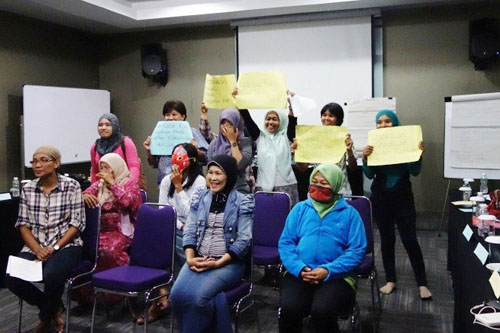 The participants’ knowledge greatly varied from those who were already very advanced in the understanding of gender to those unfamiliar with it (there was one participant who did not yet understand the definition of ‘gender’). This training was led by two facilitators from WRI, namely Edriana Noerdin and Sita Aripurnami. The training was also attended by Damairia Pakpahan (female activist from Yogyakarta) and Theresia Iswarini from Hivos, both invited by WRI as observers.

The training was started with an introduction to understanding Gender. Several participants were already familiar with the concept of gender, but there were also a number of participants who are unacquainted with the concept, despite their long experiences participating in women’s movement in Padang. An interesting thing is during the Gender session, a discussion on sexuality – which was not included in the module – also sparked. It could be implied that the issue of sexuality is significantly relevant and should be included in the following training module in order to provide comprehensive materials on gender.

The material following the first discussion was Women's Leadership. This session encouraged participants to become leaders with the capability to fight for women’s issues. Moreover, participants were also expected to be able to study how gender influences the perception of power and leadership in the family and community. The last module was on advocacy. Several inspirative stories of women’s leadership came from the participants of the training. One of them was the story of Uni Jas, who fought for reparation of access streets, by assembling housewives and mothers to fight for it together by advocating to the government. The government ultimately fulfilled their demands.

The training was closed with a material on Advocacy and a related role play. For the role play advocacy session, participants were divided into two groups. The first group discussed the advocacy issue of schoolchildren – the victims of sexual abuse who were expelled due to their pregnancies; their target of advocacy being the members of the Regional People’s Representative Council (DPRD), while the second group discussed the advocacy of mining cases that caused many women to lose their jobs. 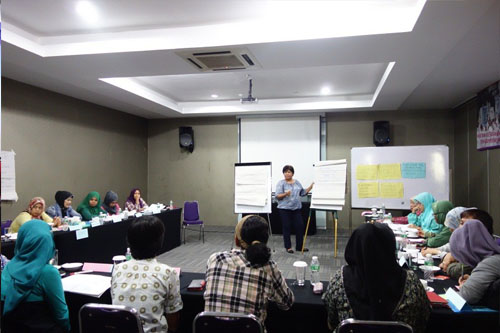 From the three days of training, participants were able to gain a new perspective and started to realize that, when using a gender perspective, women in Padang experience numerous unsolved injustice. Therefore, participants agreed on the need of female activists to have a gender-perspective sense of leadership. Leadership is defined as willing to work for a change in the lives of women, particularly in Padang City; considering that there are abundant social, ethnic, and religious challenges that still hinder their struggles.

The participants expressed their appreciation for this training for enabling them to analyze social issues and how women’s issues could be solved in a fair manner. The participants also hoped that through this training, women’s movements in Padang could solidify further by making a joint follow-up plan by building a network among fellow participants. ***